C-ITS is finally part of our mobility system

The C-Roads project, launched in 2016, has taken many steps to advance the harmonised implementation of cooperative systems. The results will now be presented at a final roadshow in June.

Cooperative Intelligent Transport Systems (C-ITS) comprise a group of technologies and applications that enable effective data exchange through wireless communication technologies between components and actors of the transport system. This can be between vehicles (V2V) or between vehicles and infrastructure (V2I). The advantage for users is that they receive information about the traffic flow and route directly in their vehicle in a timely and location-dependent manner. This makes an important contribution to more safety on the roads.

AustriaTech has been working on the topic of C-ITS since 2006. With the EU project COOPERS, the focus was primarily on more precise situation-dependent traffic information for drivers and how a stable and reliable data exchange can be guaranteed. The next project in which AustriaTech was involved started in 2017: EasyWay was about the harmonised implementation of ITS on Europe's high-level road network. Since then, the topic has continued to develop. Today, it is clear that C-ITS is also essential for new technologies, such as automated driving, or is used in other areas, such as urban public transport.

In addition to technically smooth and reliable processing, a particularly important aspect is the harmonised implementation of C-ITS throughout Europe. To this end, the C-Roads project was launched in 2016, which is working on this harmonisation on a large scale, as well as addressing the national specifics of implementation in various pilot projects. For this purpose, certain C-ITS services were defined, which were to be tested both nationally and across borders in the course of the project. For AustriaTech, C-Roads was a key project because it created the opportunity to take on a pioneering role and to play an active role in shaping the project. AustriaTech was able to draw on its international network and many years of expertise. Over the years, the platform has initiated numerous other initiatives in this field.

"When we started the COOPERS project in 2006, connected intelligent transport systems were still a vague idea for the mobility system of the future. Now, 16 years later, C-ITS is finally a real and reliable part of our mobility system thanks to C-Roads." Martin Böhm, General Secretary of the C-Roads Platform and Business Unit Manager at AustriaTech.

The steps C-Roads has taken here have been groundbreaking for a successful implementation of cooperative systems on a European level:

"We are proud that we could be part of this exciting development, which will contribute significantly to increasing road safety," says Böhm. The EU project ends in June and will also present its results at the C-ITS Roadshow on 4 June. Among other things, details on the availability of C-ITS and how C-ITS can pave the way for automated driving will be presented at this online event. Furthermore, the results of various cross-national tests and a live demonstration will be shown.

Details on the programme and registration can be found at www.saferoads.today.

The current C-Roads 2 projects will run until the end of 2023, focusing on urban use cases. Furthermore, public transport is to be more strongly integrated into the C-ITS developments. The C-Roads Harmonised Communication Profile is also being continuously developed. 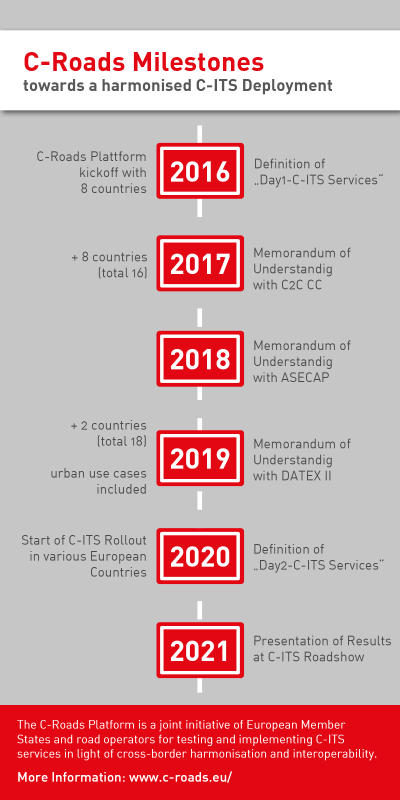